Luxury grooming service
at your doorstep!

Call For An Appointment 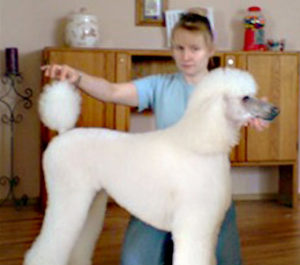 Groomer Stephanie Bajona is a second generation show-dog breeder and trainer of Afghan hounds. She was an animal control and dog licence assistant for Erin and Eramosa Townships, as well as the kennel assistant of Jagar Boarding Kennels & Afghan Hound breeders established in 1969.

Stephanie had groomed at other establishments, but the quality was not there. They were all high-volume salons done in assembly line routine with no time for detail, bonding and careful measures. Now Stephanie is offering Guelph residents the one-on-one creative bonding care your pet deserves.

Since Stephanie established All 4 Paws in 2008, she added a few more credentials, including:

All 4 Paws is a mobile pet styling service that comes right to your door in a customized grooming vehicle.

Your pet will be groomed by multiple award winning groomer, Stephanie Bojana, who is a Canadian International Certified Master pet stylist since 2000 with over 30+ years experience in the industry.